Have you ever been out to dinner in an exotic restaurant and the menu was incomprehensible?  I recently experienced that in an Ethiopian restaurant. If the hovering waiter hadn’t been there to explain to what the unpronounceable dish names referred, I would never have been able to order. Once he helped me understand, I enjoyed an incredible culinary experience. There was Injera and Doro Wat and Fir-fir available, but with no one to explain it in my language, I had no way to satisfy my hunger. 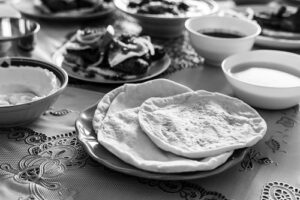 That experience is not unlike the challenge of pastors and leaders in French-speaking Africa trying to prepare to preach with little or no resources in their language of education. They are hungry to feed on the Word of God, to go deeper in their understanding, but often the resources are only available in English, and even more often they are not adapted to life in Africa. The Africa Study Bible: French Edition, a theological library in one volume, will open a whole new world of understanding to Francophone pastors in Africa. It will put the food on the table!

There are 600 million believers in Africa that are tragically under-resourced for discipleship, according to the International Review of Mission. Yet, the Church is growing faster in sub-Saharan Africa than anywhere else in the world. According to the Pew foundation 25 percent of the world’s Christians are located in Africa and that will rise to 40% by 2050. In partnership with Tyndale House Foundation, and using their New Living Translation, Oasis International published the landmark Africa Study Bible (ASB) in English last year. The ASB is the first study Bible that applies God’s Word to the contexts of Africa. With over 2,600 features written by 350 contributors from 50 countries, looking at God’s Word through African eyes, the English edition of the Africa Study Bible was launched to enthusiastic acclaim in seven countries and is already in use in 16. 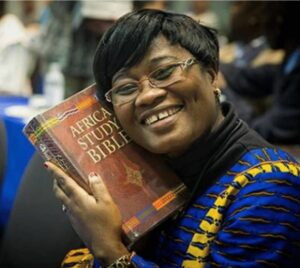 With its commitment to empowering discipleship, Tyndale House has been a key partner for Oasis International in developing this unparalleled biblical resource. A Kenyan pastor, participating in an ASB training seminar, described the potential impact of the ASB this way,

The Africa Study Bible makes it very easy for us to connect directly to our context. It is going to encourage (young pastors) back to study the African cultures, the way of life, and the storytelling that will be very important in their preaching because they are serving people who are living in this context.

Oasis has launched the Africa Study Bible in seven countries already and is working hard to reach all 24 countries that have English as a language of education. However, 23 more African countries have French as an official language. And while contextualized discipleship resources are certainly not abundant in English-speaking Africa, they are significantly more scarce in Francophone Africa. Dr. Daniel Bourdanné, General Secretary of the International Fellowship of Evangelical Students (IFES) describes it this way,

French-speaking Africa is known for its material poverty. One element of this poverty is the lack of Christian literature resources in the French language. The need for French-language Bible study materials is and remains to be, an even more profound source of poverty for the region.

An Oasis partner visiting the library at one of the most prominent seminaries in Francophone Africa, FATEB (Central African Republic), reported that only 20 percent of the books were in French, while the remaining volumes were primarily in English, a language many of the students can’t understand. The library of the Yamoussoukro Bible Institute (Côte d’Ivoire), where I lived and taught for 34 years, typifies the problem with its shelves full of old, tattered, English commentaries and theological books donated by retiring missionaries. Almost none of the students can read and understand them. It was not uncommon for me to visit former students only to discover that the pastor and his wife’s main resources were well-worn photocopies received years ago in our classes. 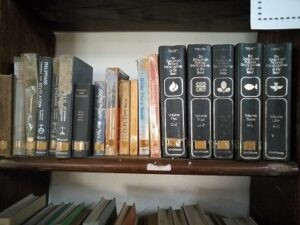 One key reason for this lack of resources is the religious makeup of France. Christian resources in English are available in Africa from sources in the United States and England, among others. But few comparable resources come from France in which only five percent of the population attends a church of any sort and 24 percent are avowed atheists (2014 demographic survey).  The impact of the Africa Study Bible: French Edition will be even greater than the English edition because the need for resources is exponentially greater in French.

Believers in Francophone Africa are hungry for biblical resources in French adapted to the contexts in which they live. The Africa Study Bible puts the food on the table for those who are hungry to feed on the Word of God. Every one of its features was written to look at God’s Word through African eyes. Finishing the Africa Study Bible: French Edition is an obtainable goal. To date, almost all the ASB notes and features are translated into French, but funds designated for the French edition are exhausted and work has slowed on this crucial project. At this pivotal moment in the project, God, in his grace, has provided a matching grant of $150,000 to bring this study Bible to completion.

Oasis International is boldly asking God to provide the first $50,000 by the end of 2018. And we are asking you to give whatever you are able to help us reach that goal. Together we can make the Africa Study Bible available in the 23 countries of Africa that needs contextualized, biblical resources in French. Together we can put the food on the table and feed half a continent with a deeper, fuller understanding of God’s Word!

Laura spent 33 years as a missionary with the Christian Missionary Alliance in Cote d’Ivoire (West Africa) before joining Oasis International.

10 thoughts on “Helping Others to Feast on God’s Word”